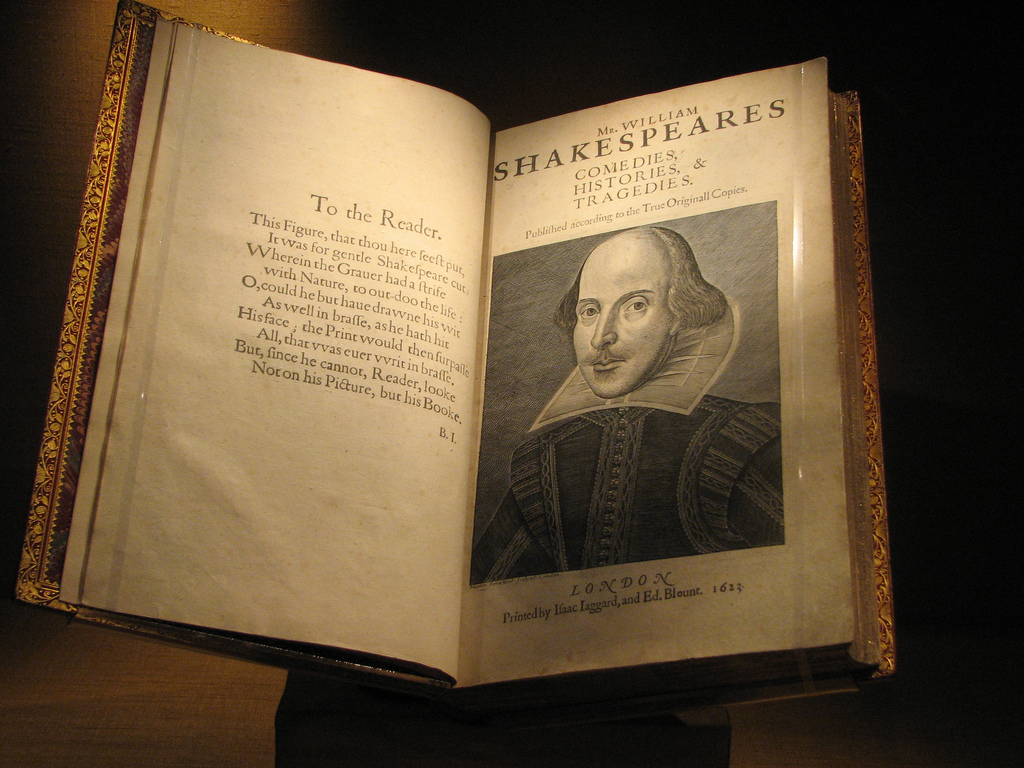 Saturday 23 April marks 400 years since the death of William Shakespeare and we’ll be celebrating the life of the Bard in style at this year’s Festival in October.

Amongst other things, we’ll be taking 4 plays and inviting you, the public, to read them live. No rehearsals, no scenery, no reimagining Elsinore as a space station, just people celebrating the magic of Shakespeare’s words.

We want to get as many people, of all ages and backgrounds, involved as possible so whether you are a teenage girl who has always wanted to play Macbeth, a Grandfather who thinks Cleopatra gets all the best lines or would like to read Puck and the Faeries with your children we want to get you to read.

Full details of the event including how to sign up to read will be out later in the year, but for now we want to hear from you about which plays we should chose. If you are loyal to Lear, amazed by As You Like it or committed to Coriolanus let us know in the comments below or email info@ilkleyliteraturefestival.org.uk.

Our work celebrating Shakespeare’s work actually began at the end of last year with our Chicken Shop Shakespeare project in schools. We know that Shakespeare is often a topic students find hard to engage with and we wanted to find a way to make his work more accessible, particularly to those at risk of disengaging with the curriculum altogether. To do this we joined forces with Chicken Shop Shakespeare, a young theatre company from Leeds who aim to bring Shakespeare to new audiences through unusual and innovative stagings.

In a series of workshops, led by Chicken Shop Shakespeare, pupils at Allerton High in Leeds, Dixon Kings in Bradford and Ilkley Grammar in Ilkley explored crucial scenes from the Tempest, Macbeth and Romeo and Juliet, taking the time to dig down into the key themes, language and meanings of the text. A bespoke programme of drama and creative writing was delivered in each school, with the aim of focusing on the interests and needs of the different student groups, and working towards staging a series of flash mob style performances around their schools.

Over the course of a few weeks, student confidence and engagement increased and their opinions about Shakespeare changed:

“I didn’t like Shakespeare before. But I enjoyed going outside and doing the acting and performing in front of a camera. Learning lines was tricky but acting The Tempest was the best.”

Here is a look at some of the final performances:

If you would like to know more about our Creative Approaches to Shakespeare in Secondary Schools please take a look at our Good Practice Guide. You will be able to see Chicken Shop Shakespeare at both Words in the City and the October Festival.