Home ➔ About Us ➔ History

The Origins of the Festival

‘Ilkley is the right size for a Festival town…large enough to provide various amenities and small enough to stroll around and run into everybody.’- J.B Priestley writing in support of the first Ilkley Literature Festival 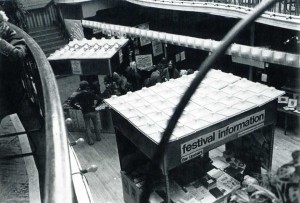 The Kings Hall during the Festival in the 1970’s

The original idea for the Festival arose from discussions between Michael Dawson (first Director of the then, newly formed, Yorkshire Arts Association) and Peter Harland (then editor of the Telegraph and Argus and Chair of the Yorkshire Arts Literature Panel) who at the time both lived in Ilkley. Michael Dawson had been to literature festivals in Cheltenham and Peter suggested, “Why don’t you try starting something similar here? Submit a plan that we can discuss at our next panel meeting.”

The 1971 postal strike gave Michael Dawson an unexpected window of opportunity to draw up firm proposals and a realistic budget. The Literature Panel subsequently approved the plans and promised a Yorkshire Arts grant provided the urban district council was willing to make a similar commitment.

Other key individuals involved in starting the Festival included: 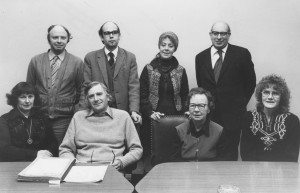 Gerald Hodges (Borough Treasurer at the time and later Director of Finance for Bradford City Council) who not only obtained Bradford’s backing but also volunteered his services as the Festival’s treasurer.

Dr Robin Alston who combined lecturing in the School of English at the University of Leeds with owning a local publishing venture, the Scholar Mansel Press.

Paddy Rowe – for many years the Festival’s sole employee who provided secretarial help.

And a large number of local enthusiasts and volunteers.

After two years of planning and fund raising, the first Festival was launched by W.H. Auden in April 1973, in one of the poet’s last public appearances. At first biennial, the Festival became a regular yearly event by 1988, going from strength to strength. 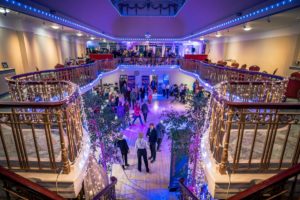 The Kings Hall during the Festival in 2019

Today the Festival is held over 17 days at the start of October in this miniature Victorian spa town at the foot of Ilkley Moor – surrounded by beautiful countryside – but only fifteen minutes from Leeds Bradford airport and a stone’s throw from Haworth, Harrogate, Leeds and Bradford. The Festival is supported by Arts Council England and Bradford Metropolitan Council and is proud to have University of Leeds Cultural Institute as our Higher Education Partner.

Over the last forty-six years innumerable famous authors have passed through its doors – from international figures and Nobel prize winners to poets like Ted Hughes and Benjamin Zephaniah. There have been residencies, literary walks, discussions, commissions, workshops, exhibitions, performances & moments of high drama.

Each year around 250 events take place in a variety of venues across the town and beyond. And Festival events are no longer confinded to October, with special events taking place across the year.