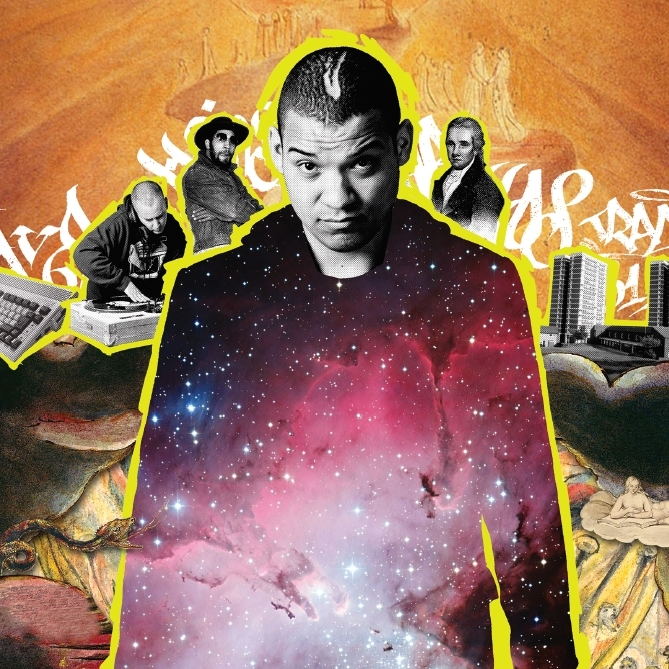 This was definitely my wild card event. That it was also the wild card for many others became apparent from the range of people in the audience – there were some far younger than me (who suddenly made me feel terribly old), right up to people in their fifties and over, here on a whim − just as I was.

As a pining ex-English student, I mostly came because of the promise of Blake and I have to say that I was a little disappointed therefore that Blake himself was not made more prominent. There were some interesting moments that made use of his poetry (with varying degrees of success), and it was great that Testament also went beyond the Songs of Innocence and Experience to introduce the Four Zoas. But, as the evening went on, I felt that Blake became increasingly lost within the story of Testament and the, admittedly impressive, digital shows which from the outset took precedence.

Having said that, Testament’s life story did provide an interesting and uplifting, if somewhat unexpected, narrative for the evening, and was a useful way of demonstrating how the two seemingly separate passions of Blake and Hip-Hop could be fused together to incredibly positive effect. Testament himself was also surprisingly engaging – after entering to loud bass, archetypal hood up, and demonstrating his truly impressive beatboxing skills, he introduced himself with self-deprecating humour as ‘Andy’ and throughout was not afraid to poke fun at his younger, more naïvely ambitious self.

At times the whole thing felt a little earnest; a little like an overly-conscious attempt to make Blake appeal to a younger generation. Part of me can’t help but wonder, at the risk of sounding like a purist stick in the mud: if Testament loved Blake for Blake, as a poet and a visionary, rather than as a proto-rap artist who needed severe modifying in order to become relevant − whether it was really necessary to twist his words and drown him out with a bassline in order to make his poetry accessible? But, if it did encourage people (or even just one person) to pick up a copy of Blake’s poems, then who am I to judge? We all need enthusiastic people to recommend us books to read, and maybe this was a different way of doing just that.

I really was not sure what to expect from this event and, in truth, even at the end I wasn’t entirely sure what I had got. I would say that to a certain extent this was a programming issue – I hadn’t realised (although I perhaps should have) that it was also being advertised in the ‘events for young people’ section of the programme and, furthermore, in comparing the two synopses, only one (and not the one I read) mentions that it is structured as a ‘coming of age story’, and this too would have helped in shaping my expectations. For me, however, the main issue was that Blake was emphasised more than he was featured; I am a literary nerd, and I missed him, but somehow I don’t think I was the audience that Testament had in mind.

Ruth is a recent graduate but still an English student at heart.