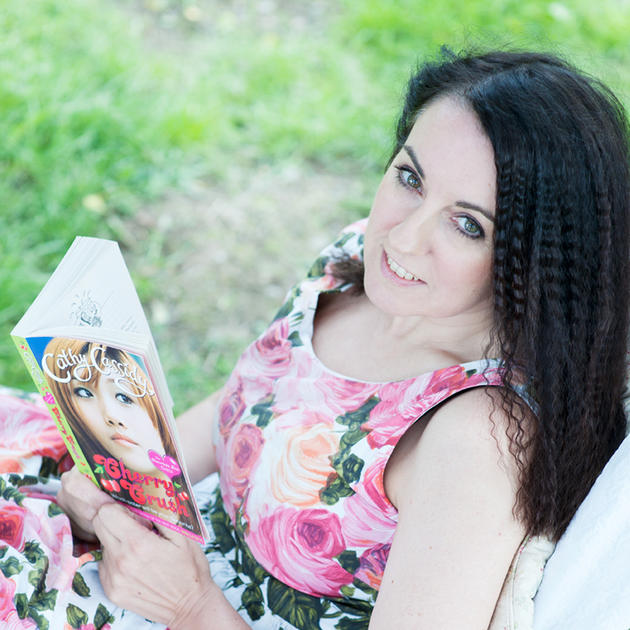 My first experience of this event was a bit like that of the character in the book – when I was accidentally locked inside Church House after the review workshop. After discovering a way out down the fire escape, I dashed across to Ilkley Playhouse, through a maze of tea tables, up the stairs and burst into the Wharfeside auditorium to find it buzzing with excitement and anticipation.

Cathy Cassidy came out on to the stage and immediately established a rapport with the children in the audience. She spoke directly to them, generating a delightful sense of good natured collusion against the teachers.

Her talk was illustrated with a series of slides showing bright, stimulating mood boards and pages from her note books and revealing her background as an artist and illustrator, as well as a teacher and writer.

She talked about ‘daydreaming’, making it clear that she meant creative thinking. She presented story writing as something within the grasp of ordinary children when they tap into their imagination and creativity. An encouraging message in an age when exams and targets seem to be paramount in education.

After an entertaining account of her own childhood ventures into writing, she told us about her latest book, Looking Glass Girl which is, of course, inspired by Lewis Carroll, whose Adventures of Alice in Wonderland celebrates its 150th anniversary this year. Cassidy gave us a tantalising glimpse of her 21st century avatar of Alice emphasising that “Wonderland is not always wonderful”.

She talked about her other books, particularly the Chocolate Box Girls, making it clear that she is writing for today’s children and revealing her concern about the issues which they face such as isolation, bullying and lack of self-worth.

Occasionally, Cassidy appeared, like the White Rabbit, to be overly concerned with time and rushed through some of the content. However she saved the time for questions at the end which proved to be valuable. The points raised by children in the audience showed maturity, were well thought out and Cassidy answered carefully. When asked about the source of her inspiration she talked about ‘people watching’ and the things which happen all around us in everyday life and encouraged children to use their own observations and experience as a starting point for their writing.

Cassidy’s presentation was a great success and the children were enthusiastically engaged for the whole 45 minutes. She did not talk down to them but included them as equal participators encouraging them to value themselves as individuals and to enjoy being creative.

I have not, as yet, read any of her books but I am keen to dip into them in the very near future.