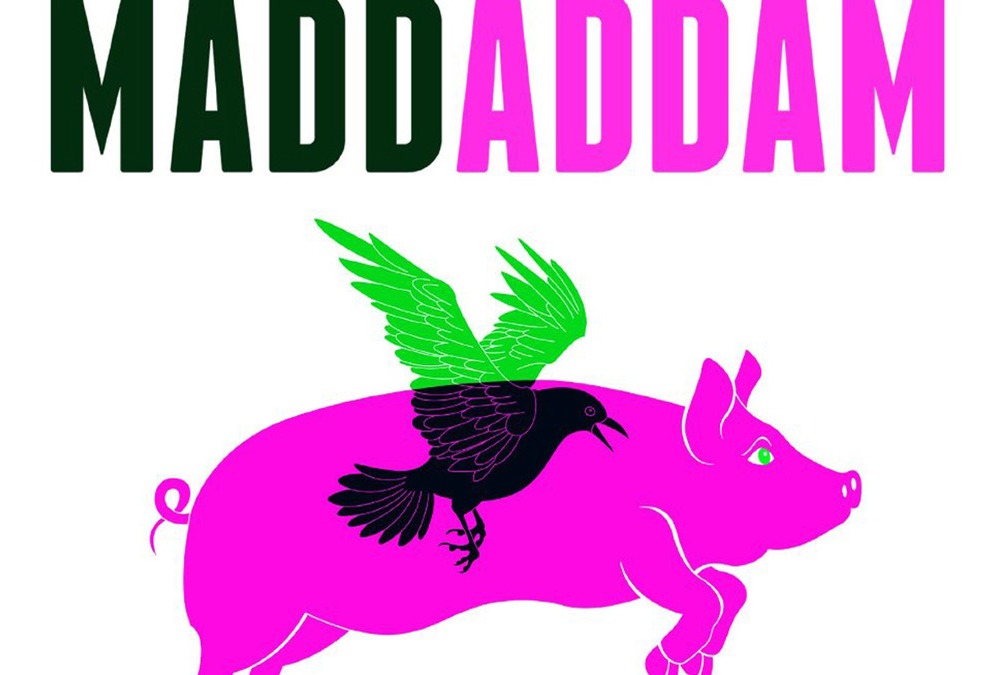 In 2004, Margaret Atwood gave a lecture at Carleton University entitled “Scientific Romancing: The Kesterton Lecture” – in it she poses the question, “What is a human being?”, later asking “How far can we go in the alteration department and still have a human being?” In our last reading group about the MaddAddam trilogy we took these questions as our starting point to think about all the not-quite-but-nearly humans in the novels and all the activities, characteristics and traits we thought Atwood might be suggest are ‘human’ or should be kept as central to the project of being humane humans.

We began by talking about the Crakers – Crake’s brainchild. Are they ‘perfect’ humans? Better-than-human humanoids? Or animals with some ‘human’ traits? Or do they encourage us to break down the human/animal binary? Some of the group found the Crakers frustrating – they are naïve, and in some ways (when it comes to dealing with the vicious painballers, for example) haven’t picked upon the rules of how things work, in a world in which humans are still battling, eating animals, using their own survival skills. But this seems to be the key – Crake has designed them to be perfectly adapted to a post-human environment (the glaring sun doesn’t bother them; their smell makes them unattractive to predators AND they can use their urine to protect themselves from attack; they eat kudzu and their own excrement; they approach sexual intercourse in an almost mechanical way). However, when humans are around, they are in potential danger: they can be manipulated and attacked (their defences don’t work on humans, but more significantly they don’t understand the concepts of threat, aggressiveness, greed, violence for its own sake). Does this highlight their non-human status? And do they have emotions? We debated this – on the one hand, they seem quite mechanical: they only have sex to reproduce, they don’t understand abstract concepts, they don’t seem to love or hate – they just do what they are programmed to do to survive. Expect, is this really the case?

As one of the group pointed out, Crake is unable to programme out singing and dreaming and they do seem to develop attachments. They care for Jimmy and then for Toby, Amanda, Zeb…and they do start to adapt their behaviour in response to reactions and explanations from the ‘humans’. For example, the Craker men are aroused to have sex if they sense a woman is ‘blue’ (in heat, I suppose). To the Crakers, the ‘human’ women always seems to smell ‘blue’. This leads to a terrible misunderstanding at the beginning of MaddAddam when some of the Crakers have sex with Amanda against her will: however, they learn that this behaviour makes the ‘human’ women unhappy so they control their urges on future occasions. This shows a respect and an understanding that to live together we need to respect each other’s bodies and happiness: is this one of the things it could mean to be ‘human’?

We discussed the problem of deciding that what makes humans, human is the ability to have emotions. Is it really the case that other animals don’t experience emotions? in Year, Atwood has Toby recall that elephants have been observed performing ritualised mourning ceremonies (like the pigoons seem to). And once we started to discuss it, many of us had examples of animals seeming to show emotions and manipulate situations (grieving cats and lying dogs featured in our discussion). I am using cautious language, because the danger is that we anthropomorphosise (our pets, especially). But is there not also a danger of underestimating animals and refusing to recognise any behaviour that does not fit into the binary human/animal thinking we depend on to understand ourselves – humans – as superior?

The pigoons are technologically produced ‘ballooned-up pigs’ – large enough to contain human organs (so the human elite can own their own living version of any organs they would want to replace). They contain human DNA and, in the post-plague world, show an uncanny intelligence and ability to survive. In Oryx and Crake they pose a major threat to Jimmy, but in MaddAddam the surviving humans start to collaborate with them (with the help of the Crakers) to fight against the painballers. The configuration of humans working with painballers – with the vital help of Blackbeard the Craker boy – against the painballers, could be seen as Atwood’s way of imagining a new kind of relationship between humans and animals – or a way to challenge the human/animal binary once and for all.

We kept returning to this idea that the human/animal binary should be challenged: Atwood is showing not only that this type of thinking no longer worked in our world of scientific development, technological dehumanisation and genetic modification, but I think she is telling us it is problematic. The living world includes animals and plants – humans are one species. When humans see themselves as the most important species they set systems in place which destroy – is Atwood telling us we need to find another way?

I will finish here – I need to get this post out, and return to work. But I will be back with some links to consider these issues further. Meanwhile, I would love to know what you think.