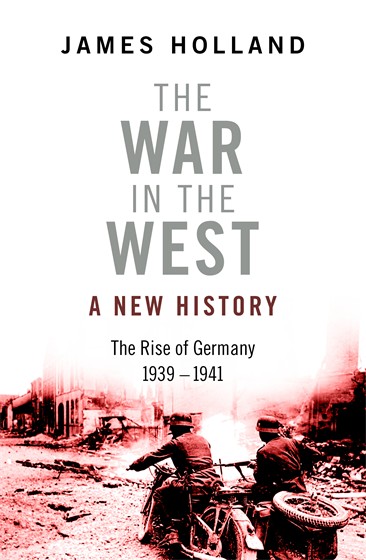 The War in the West: James Holland reviewed Audrey Edwards

“Do we need another book about the Second World War?” was the opening gambit thrown in by James Holland, who was possibly expressing what we were all thinking. He proceeded to answer the question and the next hour flew by as he presented his research, giving a view of the war from an unusual angle.

Holland has written several books about the Second World War including a series of novels which feature a fictional ‘Kings Own Yorkshire Regiment’. He gathered material for these books by talking to former soldiers who had served in WW2. During these conversations he became fascinated with the detailed information about personal kit, small arms and day to day routines. He became aware that his own understanding of the war was not always accurate but was based on assumed ‘common knowledge’.

He set out to investigate the logistics of the war. Mechanisation and technology was a huge factor in waging war, affecting each country’s capacity to make weapons and transport them to the right place at the right time. Communications were another and we learned that, although Germany was the least mechanised of all the participating nations in 1939, it was exceptionally well equipped with radios, by courtesy of Hitler’s spectacular propaganda machine.

An hour of facts and figures does not sound like an exciting alternative to the final of the Great British Bake Off, but Holland made it fascinating. The pace was brisk and Holland was a witty and entertaining speaker who interspersed his anecdotes with a selection of contemporary photographs which included the covers of Life magazine. He also gave us a highly amusing analysis of the Hollywood stereotypes of American, German, Italian and British soldiers which have influenced public perceptions over the years.

While I am sure that there were many people in the audience more qualified than myself to assess the accuracy the presentation, I personally found it an enjoyable learning experience.

Audrey Edwards is married with two daughters and lives in Hellifield. She was a teacher, mainly working in special education until she retired in 2012. Since then she has studied Fine Art at Craven College. Audrey enjoys writing stories, poems and artciles and has co-written short plays and sketches for village entertainment.