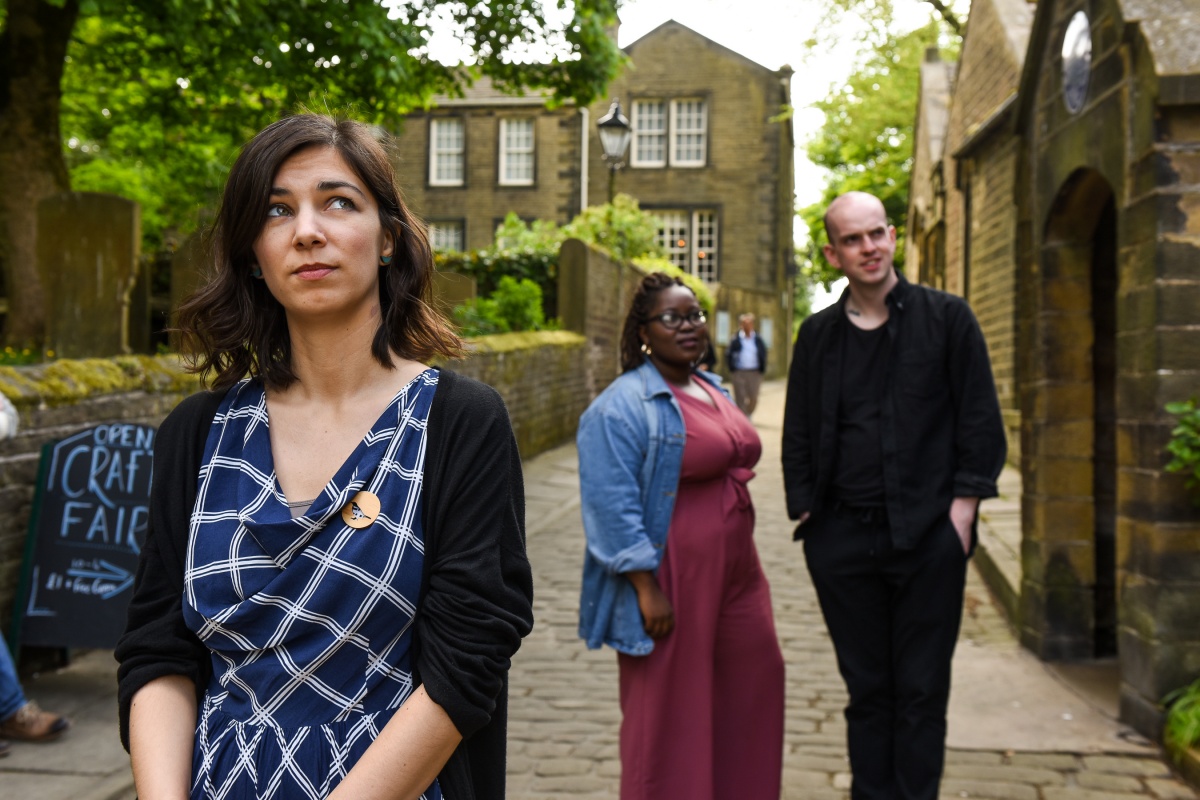 I first read Wuthering Heights in my early twenties, and it remains one of my all-time favourites. Emily’s powerful, weather-lashed storytelling led me to her sisters’ novels too and I’ve been revisiting them all, and the Brontës’ poetry, with pleasure. When I was commissioned for this project, a narrative for a song instantly began to form that would help me explore all three sisters both as a unit and as individual writers, but I resisted putting pen to paper or finger to fret until I’d visited Brontë Country.

In May, I took two buses and two trains to Haworth. I was looking forward to it, but hadn’t expected to feel like quite so much of a giddy tourist when I arrived at the bottom of main street; the steep, cobbled high street that leads up and up towards the Parsonage, Church and Old School House. Everything is very compact, and it struck me how tiny the sisters’ world was – no wonder they’d escaped to the moors so often and into their own imaginary worlds.

In the church I stood above the vault where Emily and Charlotte are buried. I paid 15p for a piece of organ music – Anne’s poem ‘Wildfell’, set to music in 1966. A sign recommended a £2 donation to help with the upkeep of the church but I only had 40p left, so I donated that, feeling guilty. To make matters worse, a cock crowed loudly as I left the church – a biblical signifier of treachery referred to by Anne in Agnes Grey – and I hoped that Anne wasn’t outing me as a miserly traitor from beyond the grave.

Said cock, with hens and chicks, was found around the corner along with recently shorn sheep; remnants of their woolly coats scattered across a field like ragged clouds. I walked a meadowside path lined with breeze-blown wild grasses, dandelion seeds sailing on the air. Reaching the start of the moor itself I headed up into the brown, purple-pregnant heather. A signpost shows you can go either left or right and reach the same destination: Brontë Falls / Top Withins.

Soft ground underfoot, birdsong in my ear, a breeze on my skin. A meadow pipit sprang from post-perch to heather-perch. The moor was populated with plump bumblebees, fluffy cotton grass and anarchic rocks of all shapes and sizes, angles and points. Two bounding black dogs were intermittently visible above the heather in a carousel horse rhythm of play. Later, on my descent, I took in the view that the sisters would have enjoyed on their way home. It’s not bad.

I investigated the Parsonage, neat and unimposing outside and in. I had expected it to be dark, grim and reek of death – several figures, including Emily and Charlotte, died here – but it isn’t. Amidst the dove-coloured walls and flagstone floors I saw Anne’s pebble collection, handpicked in Scarborough, and marvelled at the tiny handwriting of her final poem. Written when she knew she was dying, the words ‘A dreadful darkness closes in’ are minute in physical form, yet surely gigantic in her mind. A note tells how Charlotte found the sky to be a companion in her solitude after her sisters were gone. Standing out among all the neatness is a page of Emily’s, where she has crossed out two paragraphs with big Xs and smudged out a third with ink.

Back at home I found that my song was pulling itself apart. What I was writing turned out to be not one song, but three. I’ve named the resulting trio of sister songs The Liberty System: A Brontë Sisters Triptych. Further inspired by the landscape of Haworth and the peaceful Parsonage, my narrative ascribes each sister a different element, and each is in pursuit of a different kind of liberty as they return to the Parsonage to write, before their work is released into the outside world. I’m very much looking forward to releasing my songs into the world in October.

Or you can see New Responses to the Brontës at Off the Shelf on Friday 14 October, including a special light projection created by Word Life, and Beverley Literature Festival on Tuesday 18 October.