We are delighted to be able to reveal that the Poet Laureate will be opening the 2019 festival with a reading of poems from his new collection at the King’s Hall on the evening of Friday 4 October. 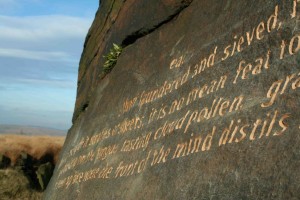 As Laureate, Simon takes over from Carol Ann Duffy and follows in the footsteps of Ted Hughes, John Betjeman and William Wordsworth. The Laureateship is held for ten years and although there are no set requirements for the role, Laureates often write work responding to national events.

The Marsden-born poet has been a friend of ILF for many years, first appearing at the festival in 1991 and since becoming a regular feature on the programme. In 2012, then Festival Director Rachel Feldberg commissioned Simon to write six poems inspired by the language and landscape of the Pennine Watershed, which were then carved onto stones across the upland by stone artist Pip Hall, forming the Stanza Stones Poetry Trail which runs from Marsden to Ilkley.

His latest collection, published today, Sandettie Light Vassel Automatic, features the Stanza Stone poems along with other works from the many commissions and collaborations upon which he has worked. In 2017 Armitage was appointed as the first Professor of Poetry at the University of Leeds.

The full Festival programme will be announced on 14 August
Tickets go on general sale on 27 August but Festival Friends will be able to book from 19 August.