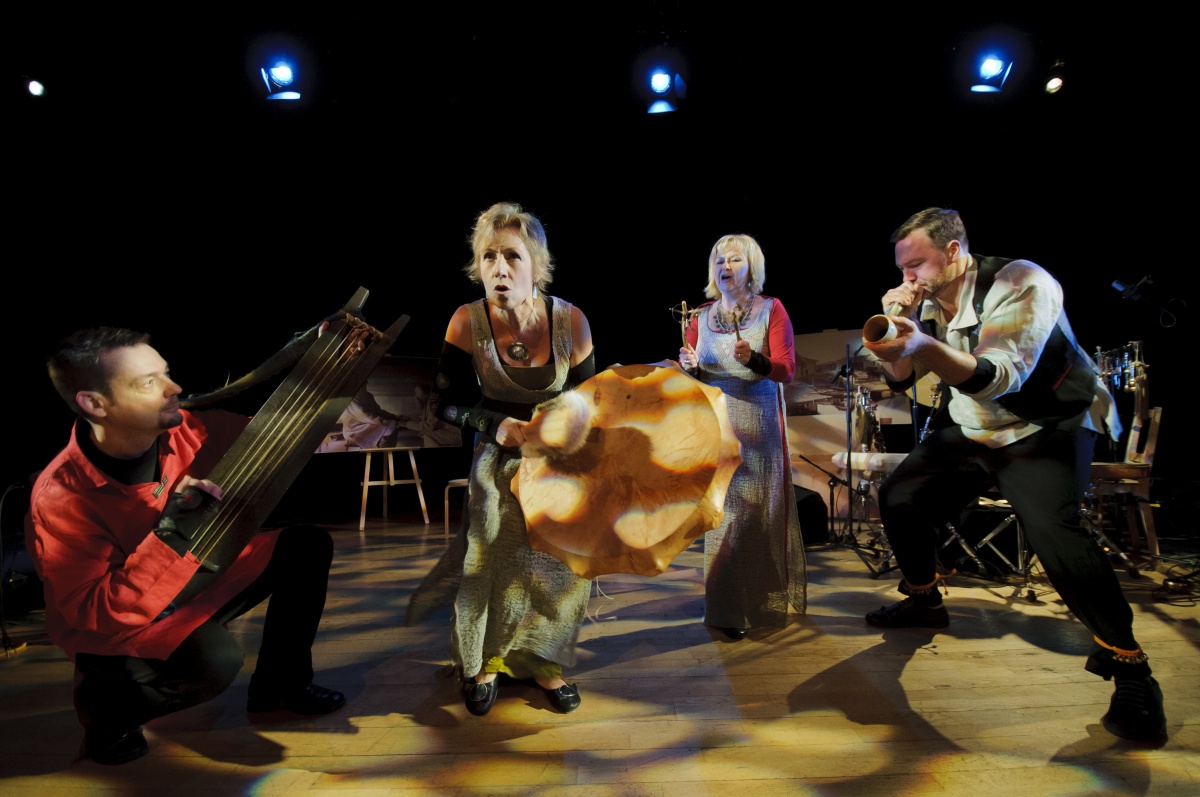 It is a cause of some chagrin that the tots of vodka which were presented to audience members by Adverse Camber didn’t come as far as me. Nevertheless, I reminded myself, I had come to see Nick Hennessey, whose stunning performance technique I have seen before. What I had not anticipated was a sort of shamanistic rock band: the stage was set with instruments that looked as if Barbara Hepworth’s sculptures had been commandeered by The Who. And as for the drum kit – it appeared to comprise a bodhran, some cymbals, some floor toms made of Tommy Cooper’s hat collection, a set of antlers, a tiara, chimes, bells and rattles and a string of the Devil’s teeth.

Surrounding the instruments were, we were told, photographs taken around Karelian (once a province of Finland, now partly Russian) in about 1915, showing the working people living in the harsh environment. Nick Hennessey started the performance with an introductory preamble about the region and his travels there in the company of two ethnographers and a man named Sergé.

The performance started with a stylised piece of poetic recitation backed by singing bowls, and moved on into traditional Finnish storytelling incorporating the phenomenal musical talents of Timo Väänänen (strumming the Barbara Hepworths), Anna-Kaisa Liedes (the most beautiful singing) and Kristiina Ilmonen (crazy vocals, flutes, the devil’s drumkit and amazing use of a violin bow on her cymbals). From sagas of cheating death, being swallowed alive, losing love and finding that the object of your affections has escaped in the form of a big fish (as you do), the evening segued into a frankly terrifying evocation of a bear-spirit with much dancing, clashing and yodelling.

After a calming interlude, the second half flowed more evenly. The photographs had been changed for some modern views of natural forms and the stories became softer, more concerned with the emotions and imbued with a contemporary edge. From love to loss, to the reclaiming of a dead son sung back into being like the stories of La Loba or Osiris, the evening ended with an audience singalong as the wolves and the bears, the gods and the flower-maidens receded back into the gloom of the dark north.

I knew Nick Hennessey’s work would fill me with joy, but the incredible range of sounds Kristiina Ilmonen can ring from a wooden flute or her own astonishing vocalisations will stay with me a very long time indeed, and I fully expect to see her and her instruments riding aloft on some war rig in the next Mad Max movie. They’d be crazy to go into battle without her.

So that just leaves the little issue of the vodka. Liquorice flavour, apparently. You owe me, Mr Hennessey. You owe me big.

Rosalind York read Theatre at Dartington, and is a poet, performer and dog walker whose work has been collected into anthologies by Other Poetry and Otley Word Feast Press. She has been a reviewer for Book Time magazine and for the Ilkley Literature Festival, and enjoys reviewing as a way to sharpen her prose. She gains inspiration for her writing while doing the washing up and walking in the Yorkshire countryside. She suspects some of her poems were found growing near footpaths while out and about and is worried the dog may be a better poet than she is, being so much lower to the ground. Her first pamphlet, The Flank of a Fish, is available from Otley Word Feast Press www.owfpress.com